The Sunday before leaving for three weeks in France I was standing in the choir and my right leg lost most of its feeling.  It tingled down to the foot.  I could see I was standing.  I could feel my upper body level, but my legs were numb.  All I could think of was what if this happens in France, in the middle of the Place de la Republic or climbing the steps to Montmartre? 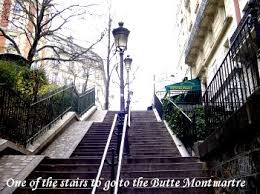 I went home immediately and strapped myself into my inversion table, rocked back and forth a few times and then hung upside-down for as long as I could stand it.  The numbness went away, but what was I going to do in France?

Walking around Paris, moving slowly from our Paris Oasis beneath Montmartre all the way to Place de Contrescarpe on the Left Bank, my right leg remained numb.  I could keep from falling by concentrating on the placement of my foot, using focus and intention rather than unconscious walking.  I was definitely preoccupied when we stopped in at the Shakespeare and Co. book store, the one-time lending library which catered to the young writers hanging out in Paris before WWII and after.  These authors included Ernest Hemingway, Gertrude Stein, Ford Madox Ford, F. Scott Fitzgerald and Ezra Pound.  We were going to study the writings of some of these in our week long writers’ retreat with Natalie Goldberg.  Distracted, my cell phone disappeared.  No posting on face book, no phoning via skype.  I was about to enjoy a complete vacation from electronic communication and was able to focus solely on writing and meditation.  Natalie’s retreats are conducted in silence except for class time.  That means meals, and morning and evening bath and bedroom negotiations among the 10 women living in La Solitude, a quarter mile from the Ferme Villefavard.  Can you imagine how you might emerge from such a phone free existence in a euphoric state of mind?

My solution to the numbness problem was to hang from my knees with my feet out of the window in the second floor of this beautiful building (above).  This position lifted my sacrum and lower vertebra off the floor.  I used padding under my knees.  Then I lowered my self down (my butt is up against the wall under the window, here’s a picture I took when I was in New York City last month.

You can link to the image in a previous post.  The idea is to perform gentle pelvic clock motions to open up the pinched passage so the nerve endings can communicate with the feet and lower legs.  At home I use the Back2Life machine every morning.

The Writers’s retreat gave me plenty of opportunity to be quiet, write and read aloud.  The countryside was filled with Limousin cows, prime beef, and riotous wildflowers.  I managed to explore the Lascaux caves and canoe with my friend after the retreat.  The trip home was uneventful.  Because I had no phone, no phone money and no phone numbers, I took the light rail, the C Rapid ride bus to west Seattle and walked to my house pulling my suit case.

Keep moving, is what I say.  It would have been tempting to avoid stepping out into the streets of Paris, the roads around Villefavard, the deep caves and the castles of the Dordogne, but I did not.  I trusted my body would not fail me and it did not.

Be well, leave me a comment, Do well and Keep moving.